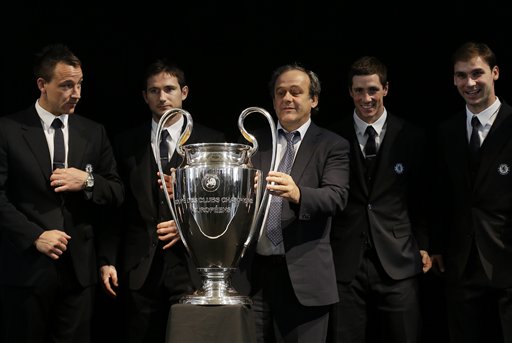 Michel Platini President of UEFA, centre, touches the European Cup trophy as he poses for photographs with members of the Chelsea soccer team, from the left John Terry, Frank Lampard, Fernando Torres and Branislav Ivanovic, who won the trophy in 2012, during the handing back ceremony, London, Friday, April 19, 2013. The 2013 Champions League final will be played in London at Wembley on May 25.(AP Photo/Alastair Grant)

This entry was posted on Saturday, May 4th, 2013 at and is filed under . You can follow any responses to this entry through the RSS 2.0 feed. Both comments and pings are currently closed.