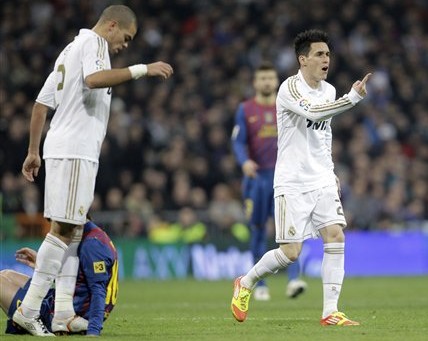 In this photo taken Wednesday Jan. 18, 2012, Real Madrid’s Pepe from Portugal, left looks down at F.C. Barcelona’s Lionel Messi from Argentina a moment before stamping on his hand as Jose Maria Callejon, centre protests to the referee after receiving a yellow card for his foul on Messi. Real Madrid’s coach Jose Mourinho warned Real Madrid defender Pepe could face punishment for stamping on Messi’s hand in Wednesday’s 2-1 Copa del Rey loss to Barcelona. Pepe has a history of aggressive play in the “clasico” series, including a red card in last season’s Champions League semifinals, and the hot-tempered Portugal defender stepped on Messi’s left hand in the 68th minute of the match. Even Manchester United striker Wayne Rooney tweeted

This entry was posted on Monday, February 13th, 2012 at and is filed under . You can follow any responses to this entry through the RSS 2.0 feed. Both comments and pings are currently closed.