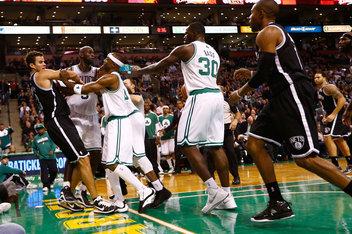 BOSTON, MA – NOVEMBER 28: Kevin Garnett #5, Jason Terry #4, and Rajon Rondo #9 of the Boston Celtics get into a fight with Kris Humphries #43 of the Brooklyn Nets during the game after Garnett was fouled on a play on November 28, 2012 at TD Garden in Boston, Massachusetts. Rajon Rondo and Kris Humphries would each be ejected from the game immediately following the fight. NOTE TO USER: User expressly acknowledges and agrees that, by downloading and or using this photograph, User is consenting to the terms and conditions of the Getty Images License Agreement. (Photo by Jared Wickerham/Getty Images)

This entry was posted on Thursday, November 29th, 2012 at and is filed under . You can follow any responses to this entry through the RSS 2.0 feed. Both comments and pings are currently closed.