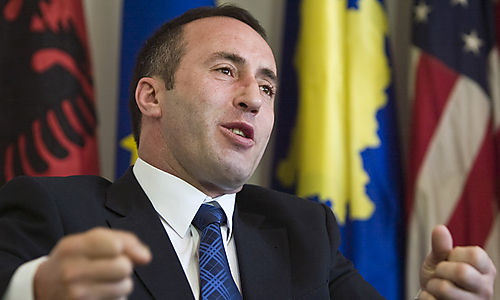 Kosovo’s former prime minister Ramush Haradinaj gestures during an interview with The Associated Press in Kosovo’s capital Pristina Tuesday, April 22, 2008. Kosovo’s former prime minister, acquitted of killing Serbs by a United Nations war crimes tribunal called upon ethnic Albanians Tuesday to make a “proper offer” for the Serb minority to overcome their objections to Kosovo’s independence. Haradinaj urged governments around the world Tuesday to help peace in the Balkans by recognizing Kosovo’s independence. “We call upon other countries to recognize us as an independent state,” Haradinaj told the Associated Press in an interview Tuesday. “It would be the right input to normalization and peace in the region”. Kosovo’s independence has been swiftly recognized by 38 countries, including the United States, Japan, Canada and most member countries in the European Union. (AP Photo/Visar Kryeziu)

This entry was posted on Wednesday, August 31st, 2011 at and is filed under . You can follow any responses to this entry through the RSS 2.0 feed. Both comments and pings are currently closed.