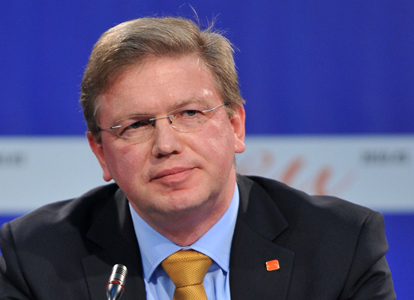 EU enlargement commissioner Stefan Fule gives a press conference after an EU-Balkans meeting in Sarajevo on June 2, 2010. The meeting comes as concern mounts across the Balkans that Europe’s debt crisis and its problems absorbing the 12 nations that have joined the bloc since 2004 will slow down further enlargement. AFP PHOTO / ELVIS BARUKCIC

This entry was posted on Thursday, July 19th, 2012 at and is filed under . You can follow any responses to this entry through the RSS 2.0 feed. Both comments and pings are currently closed.