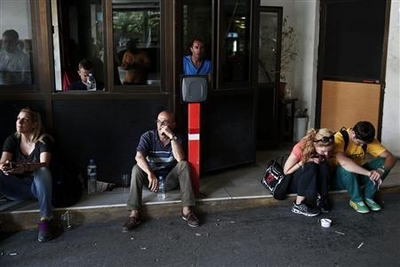 Athens’ municipal employees take part in a protest outside the town hall of Athens July 10, 2013. Greek labor unions on Wednesday called a 24-strike on July 16 to protest against planned public sector layoffs demanded by the country’s international lenders in exchange for more funds. REUTERS/Yorgos Karahalis

This entry was posted on Thursday, July 18th, 2013 at and is filed under . You can follow any responses to this entry through the RSS 2.0 feed. Both comments and pings are currently closed.