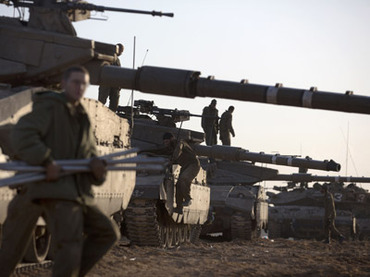 Israeli soldiers prepare tanks at an Israeli army deployment area near the Israel-Gaza Strip border, in preparation for a ground operation in the Palestinian coastal enclave on November 18, 2012. Prime Minister Benjamin Netanyahu said that Israel is ready to “significantly expand” its operation against militants in the Hamas-run Gaza Strip as it entered its fifth day. AFP PHOTO/MENAHEM KAHANA

This entry was posted on Tuesday, November 20th, 2012 at and is filed under . You can follow any responses to this entry through the RSS 2.0 feed. Both comments and pings are currently closed.